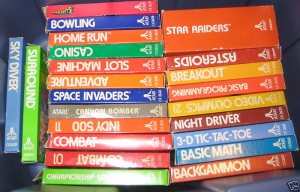 Selling the heart of my Atari 2600 collection was really tough. I spent YEARS at flea markets and thrift stores trolling for stuff to round out my collection. When we were first married, my wife and I would go to flea markets and thrift shops at least once a week. On some weekends we would spend hours travelling from one flea market to the next. She loved old, delicate things, and I love old, 8-bit things. My fascination with the Atari started when I was a kid. I remember taping yellow construction paper to my old B&W TV in an attempt to recreate the game Adventure. I had no idea how they “got” those images onto the screen. My memory of my youth faded after I got a car, got a job and got married. But after seeing an Atari cartridge in the thrift store, my mind instantly triggered memories of people (I play Atari with), places (where I played Atari), music (that was on the radio when I played Atari) and even smells (that I smelt or dealt while I was playing Atari). That triggered my fanatical collecting. Eventually, my closets were stuffed with loads of things from that era: ColecoVision, Atari, Intellivision and more. It was way too much, but I had lots of happy hours with those games, although I know I spent way too much time collecting it all. I would have been better off talking to my wife for hours and sipping tea. But one relationship did blossom as a result of my maniacal collecting–I formed a great friendship with Joe Grand thanks to my recognition of the 8-bit beastie on a button he wore.

I started selling stuff off to raise money for my first Uganda trip, and remember being disappointed that it didn’t go for more. I was so disappointed in the payoff that I horded my collection after that. Besides, I reasoned, I want my kids to know about this stuff. My kids (and I) play the Wii and the XBOX360. So now that we’re scaling back in preparation for our year in Africa, the last of my collection is going. I gotta admit, it hurts, but space is limited and after all, it’s just stuff. I’ll be selling my rares and prototypes next week I’m not expecting much for them. But I do hope that one day when I’m old and Alzheimered, some kind soul will bring me a boxed copy Raiders of the Lost Ark so I can remember the kids I played with in the farmhouse and that blasted “Sweet Dreams” song by the Eurythmics. Just don’t bring me a copy of Atari 2600 Pac-Man. That one reminds me of Craig and smell of the week-old Doritoes he had lodged in his braces.